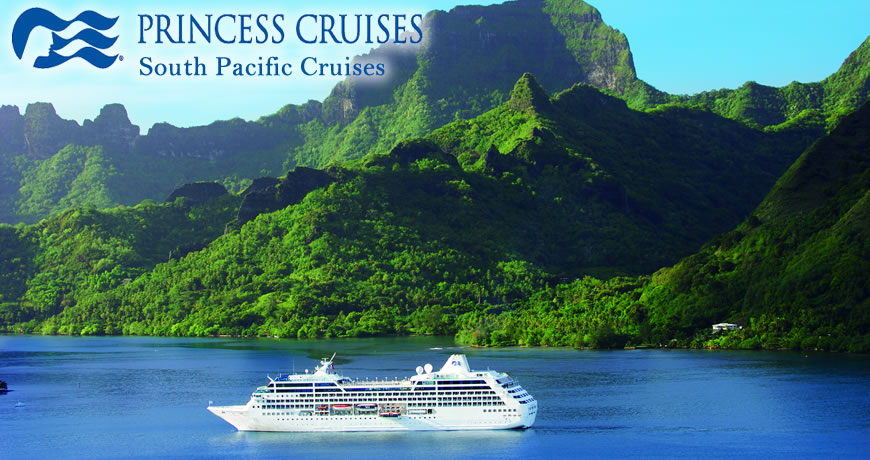 Princess Cruises to the South Pacific

Beautiful sunsets and enchanting islands and atolls form the foundation of a South Pacific cruise with Princess. As other liners, contemporary and luxury, explore this regions in between Australia and Hawaii, Princess devotes multiple itineraries, delving into the stunning landscape, unusual wildlife, and unique cultures of each South Pacific island.

Although longer cruises do visit a handful of these island nations, the South Pacific isn’t simply a region you pass through. Art, from paintings to musicals and films, has romanticized the landscape and climate of this area of the world, so why not experience all facets?

Princess’ South Pacific cruises run throughout the year and include the following itineraries:

Round Trip from Brisbane: Start off in this Australian coastal city to explore the region of the South Pacific closest to Asia. Here, you’ll get to see the beauty of New Caledonia and Vanuatu before returning to the island continent. Or, ships may sail north to explore the ports of Papua New Guinea.

Hawaii and French Polynesia: Begin in familiar U.S. territory and then sail to the part of the world that inspired many of Paul Gauguin’s paintings. Princess cruises French Polynesia’s major islands, including Tahiti, Moorea, and Bora Bora and then takes a similar approach with Hawaii, traveling to Kauai, Maui, Kona, and Honolulu.

Sydney to Fiji: The architectural magnificence of the Sydney Opera House and this Australian city’s cosmopolitan character start off your trip, but the atmosphere quickly changes into something more experimental, exploratory, and intimate. Sail from here to Fiji and New Caledonia before returning to Australia.

French Polynesia: See the sights of several French Polynesian islands on board this itinerary. You’ll visit Tahiti, Huahine, Rangiroa, Bora Bora, and Moorea. Or, for a longer trip, spend time in this region before sailing to New Zealand and Australia.

Part of a South American Cruise: Longer South American cruises go up the coast to Ecuador, Peru, and the Panama Canal, but not before exploring several island nations within the eastern South Pacific first.

Princess presents countless opportunities to explore the South Pacific once you land in port:

• Take in the beauty of the coral reefs with a scuba trip, or through snorkeling and fishing
• Find out about the region’s ancient history, including burial grounds, petroglyphs, and religious beliefs
• Spend your time relaxing on some of the most beautiful beaches in the world, with many surrounding a lagoon of aquamarine water. Sands range from nearly white to nearly black
• Schedule a wildlife expedition, particularly to see the region’s many birds
• Learn about the economy, from pearl farming to vanilla plantations.

From exploring unique cultures on each island to taking in the breathtaking landscape, Princess’ South Pacific cruises have been named some of the most romantic itineraries in the world. Experience it yourself by scheduling a trip through Direct Line Cruises today.