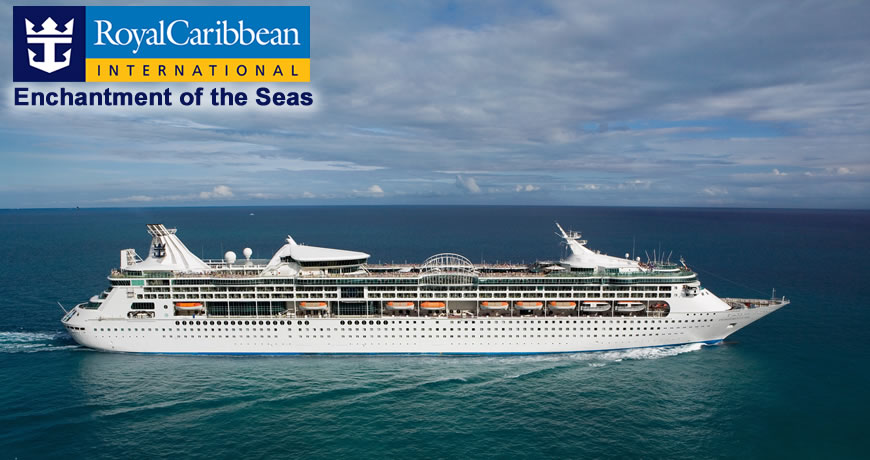 Royal Caribbean Enchantment of the Seas 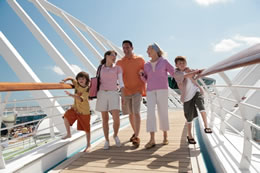 Imagine taking a cruise ship, a very nice cruise ship that you could make even better, if only it were a bit longer.  What’s a cruise line to do?  What else….stretch it out!  And although the process was not nearly that simple, the end result was the same.  In 2005, in order to increase the size of Enchantment of the Seas, the ship was literally sliced in half, and a new midsection 73 feet long was added.

One of the most noticeable and appreciated changes to the Enchantment is the amazing pool deck.  The sports pool is perfect for swimming laps, water volleyball and other organizedactivities, and is flanked by two hot tubs.  Then there’s a family pool adjacent to a brightly colored kiddie splash pool and two additional hot tubs.  This is a wonderful set up for families, particularly those with young children. 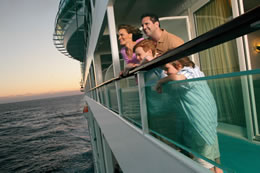 If however, you are not traveling with any little ones, you can spend your days lounging in the adult only solarium. It has a pool, two hot tubs and a retractable crystal canopy to keep out the elements.

For adrenaline junkies the Enchantment has something no other ship has…a bungee trampoline. The participant puts on a harness and is then hooked to several bungee ropes. Those ropes are attached to poles reaching high above the trampoline platform. As the participant jumps higher and higher the bungee ropes are moved up the poles allowing the participant to reach heights and do flips and other maneuvers that would otherwise be impossible on a regular trampoline.  And think of the views! 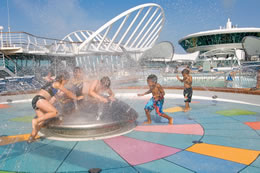 Of course there is the iconic Royal Caribbean rock climbing wall, jogging track, ping pong tables, fitness center and day spa. The Enchantment of the Seas has a video arcade called the “V-Deck” that is located on Deck 10 in the same area as Adventure Ocean kids club. The latest games such as Dance, Dance Revolution along with the classical games such as Ms. Pac Man are offered. Video game competitions are held. 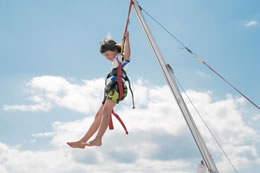 The Windjammer Cafe is open breakfast through dinner and late at night for snacks. Breakfast ranges from continental to full buffet. Later in the day your choices include soups, salads, sandwiches, hamburgers, hot entrees, grilled meats, and desserts. From 6pm to 9pm, Asian cuisine is served at the Jade Restaurant located in a separate area of the Windjammer. Thai, Malaysian, Japanese, Chinese, Indonesian, and Indian fare are among the menu choices.

Chops Grille charges a nominal fee but it is well worth it, as it is comparable to some of the best land based steakhouses! Café Latte-tudes serves Seattle’s Best coffee including lattes, cappuccinos, espressos and other specialty coffee drinks while Ben And Jerry’s has your favorite flavors served in sundaes, shakes, smoothies and fresh-made waffle cones.

The Palladium Theater features the Royal Caribbean singers and dancers as well as a variety of other live entertainment.  The weekly “headliner” performance is always something to look forward to. All shows are family friendly, with magicians and jugglers receiving high marks from the youngest cruisers. 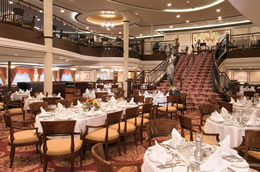 There are eight bars and lounges onboard including Boleros (Latin lounge), the Champagne Bar (elegant spot often with a musician playing soft music), Schooner Bar (check out the piano player), the Carousel Lounge (for dancing) and Viking Crown Lounge (best at sunset). The Casino Royale has slots, blackjack, craps, roulette, three card poker, Caribbean stud, & Texas hold’em. The casino typically operates any time the ship is in international waters. The casino staff is always willing to answer your questions if you are trying to learn a new game.

The Enchantment of the Seas sails year-round from Baltimore Maryland.  Itineraries include the Caribbean, Bermuda, Florida / Bahamas, and Canada / New England. View our featured cruise deals and itineraries on the Royal Caribbean Enchantment of the Seas. For more information on these cruise itineraries, click below or call Direct Line Cruises.

Enchantment of the Seas Facts