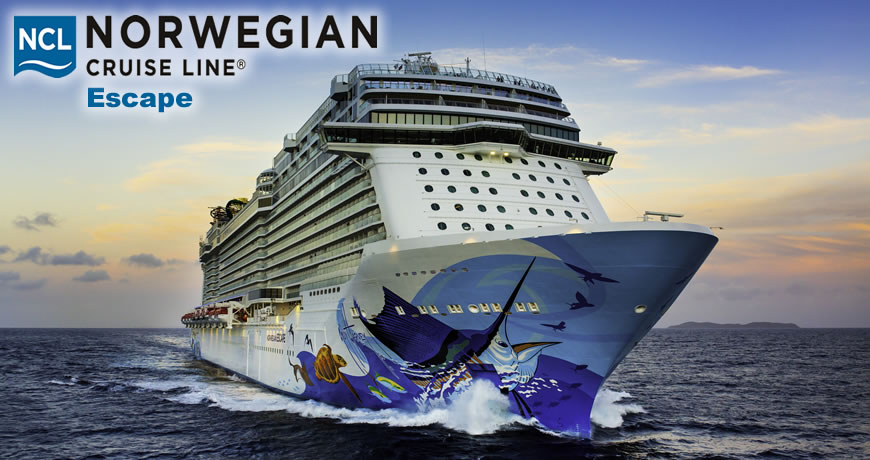 With the Norwegian Escape, NCL is launching its biggest ship as of 2015. As the first vessel in the Breakaway class, it set sail in October 2015 with a design suited for 4,248 passengers and will be the sister ship to the Norwegian Bliss.

What makes the Escape unique? Aside from its name, which was selected through an online contest, it comes with the largest water park at sea, includes Norwegian’s innovative Waterfront area, and lets travelers pick from an array of accommodations.

NCL’s newer features make the Escape a standout among the fleet. Onboard this cruise, you’ll have access to:
• The Waterfront – NCL’s open-air area with an array of restaurants and bars.
• 678 Ocean Place – A three-deck dining and entertainment area.
• The largest rope course, an aqua park, and a themed mini golf course.
• Spice H2O – An adults-only section for cooling off after sunbathing and lounging in hot tubs. In the evening, the area turns into a nightclub.
• Vibe Beach Club – An area with oversized hot tubs.

NCL continues to retain its Freestyle cruising concept, which, if you’re not familiar, lets you select when and where you want to eat. As a baseline to this plan, the Norwegian Escape divides the main dining room into three separate areas: Taste, Savor, and The Manhattan Room.

Paid dining expands the possibilities. With this in mind, you’ll be able to dine at standards like Cagney’s Steakhouse, Le Bistro, Moderno Churrascaria, and La Cucina, all of which feature a la carte pricing. Added to this, a new 100-person dining room at Taste gives the ship a new level of exclusiveness.

Further presenting more options, Norwegian partnered with Margaritaville and Iron Chef Jose Garces. The result is another Margaritaville restaurant and a 5 O'Clock Somewhere Bar for the former, while the latter emerges as Bayamo, a Waterfront establishment with Latin-inspired cuisine.

For expanding your palette, Food Republic is yet another new addition. Its Waterfront location opens up your travels to a mouthwatering selection of gourmet international foods.

Norwegian stuck with the standards when building this ship and went beyond. Those who’ve taken NCL trips before will recognize the casino – here, covering over 19,000 square feet – and can enjoy Mandara Spa, occupying two decks and offering 50 services and 24 treatment rooms.

For an evening show, Escape gives you a choice. Take in the retro spectacle at the ‘80s-themed supper club, or come to the theater to watch a Broadway show. This ship lets you select between After Midnight and Million Dollar Quartet.

If bar-hopping is more your thing, the Escape has you all set. During your travels, stop by the new Skyline Bar or Tobacco Road, or sample the 24 draft beers on tap at District Brew House. The Cellars, as a compliment, presents a curated wine list and a 180-degree view from the tasting room.

During the day, the Escape is all about staying active and relaxing. The new features include:
• Sky rails and two planks
• A free-fall water slide
• A tandem Aqua Racer slide
• Thermal suites with 17 heated loungers, a hydrotherapy pool, a steam room, dry sauna, and a snow room.
• A salon and barber shop

To accommodate more families, this ship offers the Guppy Program, which includes childcare services for kids 6 months to 3 years. Older kids can interact with those closer to their age at the Splash Academy, while teen club Entourage has something for the 13 to 17 year old set.

Get to know NCL’s latest features on board the Norwegian Escape. To schedule your trip, browse itineraries and then book your vacation through Direct Line Cruises.

View our featured cruise deals and itineraries on the Norwegian Escape. For more information on these Escape cruise itineraries, click below or call Direct Line Cruises.