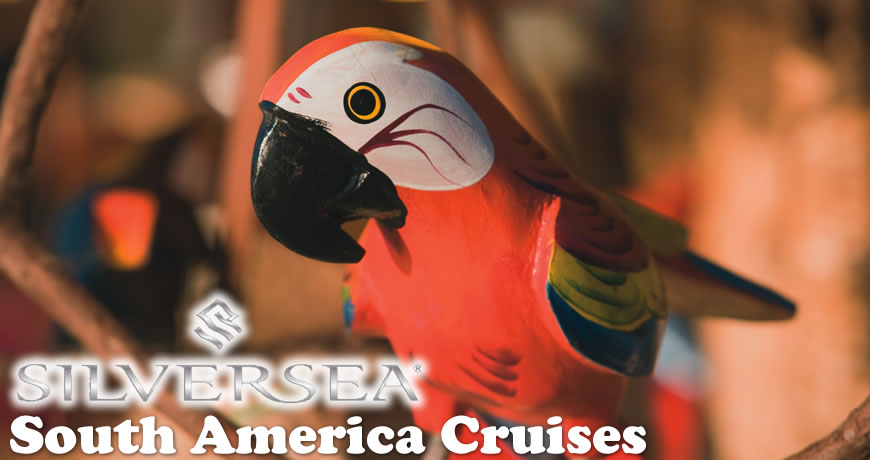 Untouched natural beauty pervades all regions of South America: The winding Amazon River, the Chilean fjords connected by rivers, some of the world’s best beaches on the Atlantic coast, and centuries’ old ruins high in the Andes Mountains. And no matter which way you choose to explore, there’s always a sight to see.

Silversea’s small ships get up close to some of the world’s most intriguing landscapes in South America. That may be the colorful, dense jungles surrounding former rubber boomtowns in the Amazon, or sailing close to the frigid desolation of Antarctica. Included are excursions to some of the most exciting archeological sites, such as Machu Picchu, Chan Chan, and Easter Island, with enrichment opportunities providing a more comprehensive overview.

Silversea departs from various ports on the continent or Bridgetown, Barbados for its South American itineraries. Trips last a minimum of 11 nights at sea and are on board one of the following vessels: • Silver Whisper • Silver Shadow

Whether it’s spending time on some of the world’s most sought-after beaches or going high into the mountains, Silversea takes the following routes in and around South America:

Between Valparaiso and Buenos Aires: Between two major capitols is a trip exploring the continent’s southern landscapes, of fjords, mountains, and pampas. With the ship traveling one way, Silversea begins with a cosmopolitan character in Buenos Aires, considered the “Paris of South America,” and Montevideo, the Uruguayan capital and major port with a strong European feel. But from here, the ship and temperature go south as you pass through and stop in the Falkland Islands, go around Cape Horn, and then proceed north through the Chilean fjords, where you’ll travel through an intricate network of waterways and get up close to glaciers.

Round Trip to Bridgetown: A few stops in the Caribbean lead into one of the most exciting itineraries to experience. Silversea’s small vessel travels along the Amazon River, beginning with Devil’s Island near the mouth. Exotic wildlife that you’ll see nowhere else in the world, such as pink dolphins, dense jungle, and historic small cities still bearing colonial influences emerge as you travel to Macapa, Alter de Chao, Santarem, Parintins, Manaus, Anavillanas, and Boca de Valeria.

Valparaiso to Ft. Lauderdale: This exploration of the western coast focuses on towns and cities on the edge of the Andes. You’ll explore the culture and sights of Chile, Peru, Ecuador, and Colombia before passing through the Panama Canal and crossing the Caribbean.

Buenos Aires to Bridgetown: There’s a reason Brazil’s beaches – on the mainland and several islands off the coast – are some of the world’s most popular. Stunning sights and soft sands, be it the Christ the Redeemer statue in Rio De Janeiro or the jungle not far off shore in smaller ports, beg for you to spend time outdoors. Explore, lounge, and swim in the warm Atlantic in Santos, Buzios, Rio De Janeiro, Salvador de Bahia, Natal, Fortaleza, and Devil’s Island.

There is no shortage of sights to see and experience in South America. So to explore this part of the world, find an itinerary suiting your expectations and schedule a trip today through Direct Line Cruises.