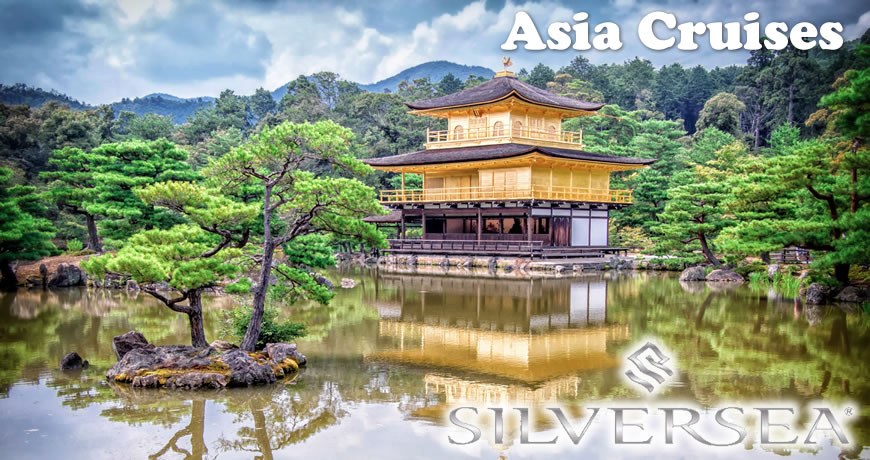 Itineraries encompass all aspects of Asia, from its history stretching back centuries to modern developments in Shanghai and Dubai to its various religions, including Islam, Hinduism, Buddhism, Confucianism, and Shintoism. Excursions get you up close to the Great Wall and Silk Roads, introduce you to each country’s unique cuisines, and take you to the top spots for shopping, dining, and exploration.

Silver Shadow and Silver Whisper: These sister ships debuted in 2000 and now accommodate 382 passengers. 194 units are situated primarily on the outside, with 80 percent featuring teak balconies. Within the design are various restaurants, lounges, a casino, conference room, computer center for internet access, spa, library, boutique, beauty salon, and pool.

With trips lasting 11 nights or longer, Silversea makes the following routes through and around Asia:

Singapore to Hong Kong: This standard Southeast Asian itinerary hits all of the major notes. Lounge by the beaches in Ko Samui, while a few ports over introduces you to the urban yet religious character of Bangkok. Two major multicultural cities, both expanding with more residents and skyscrapers, bookend your trip.

Roundtrip to Singapore: This single-island country, known for its clean, urban character and multicultural population, starts off a voyage to Southeast Asia’s major cities and islands. You’ll take off to Kuala Lumpur, Yangon, and Penang, while spending time in Sumatra, one of Indonesia’s largest islands.

Singapore to Bali: Few cruise lines explore Indonesia and Malaysia in depth, but Silversea’s Southeast Asian itinerary strays away from the mainland – and popular ports – to do just that. Experience the vast jungle on the island of Borneo with a stop in Sarawak, while several major aspects of Indonesia’s varied islands follow: Unusual geography in Sulawesi, wildlife in Komodo, and strong Hindu influences in Bali.

Singapore to Muscat: Silversea makes a grand, sweeping tour through Asia, essentially traveling from one side to the other. After departing this major city, the ship makes its way through Southeast Asia’s larger ports before going through Sri Lanka, Cochin, India, and Mumbai.

Tokyo to Hong Kong: Explore East Asia’s major cities with a tour of China, South Korea, and Hong Kong. The neon lights of Tokyo take you to the urban vastness and technological innovations of Shanghai. In between are excursions to the Great Wall and the Forbidden City and stops in Osaka, Jeju, Hiroshima, Dalian, and Busan.

As the world’s largest continent, Asia has no single perspective. So explore it on your own terms, in luxury, with a Silversea cruise. Select an itinerary today through Direct Line Cruises.