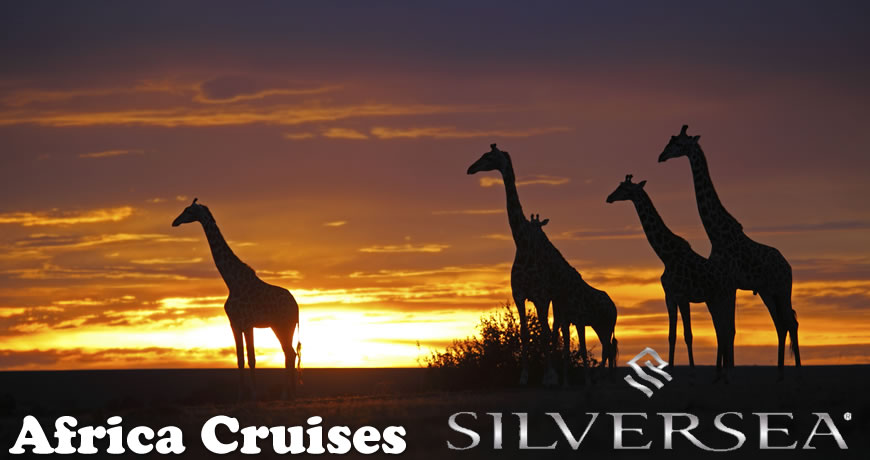 A continent not easily open for exploration, Africa is a land of vast deserts and savannah, ancient kingdoms, lasting European influences, and exotic wildlife found nowhere else in the world. Civilizations like Ancient Egypt and the Songhai Empire once flourished there, while elephants, rhinoceros, and an array of primates inhabit its landscape. It’s at once intriguing and intimidating, and for these reasons, Silversea presents one of the most comprehensive African cruise itineraries.

Three ships travel the continent, visiting Northern, Eastern, Western, and Southern regions through a choice of itineraries. All trips last a minimum of 13 nights and expose travelers to attractions ranging from game reserves to ancient pyramids, tombs, colonial facets, and the Zululand.

As well, Silversea provides an even more intimate look with its Explorer Cruises, which present a “raw” look at the landscape and wildlife.

Silver Explorer: Silversea created this ship to specifically travel to the world’s remote destinations, all while offering luxury in the process to 132 travelers.

West Africa: Silversea intensively tours the western region. The cruise begins with West African countries, with cultures and cities dating back thousands of years: Ghana, Togo, Benin, Bom Bom Island, and Sao Tome and Principe. From here, the ship visits lands known for jungles, precious metals, and arid deserts, including Angola and Namibia, before finishing in the cultural and commerce center of Cape Town, South Africa.

East Africa: Cape Town starts off your journey, but the character changes with each port. Silversea explores the eastern region of South Africa, known for the Zulu homeland, wildlife reserves, and beaches, with stops in Port Elizabeth, East London, and Durban. Ships migrate northward through Mozambique and Madagascar, before stopping in Zanzibar, Tanzania and Mombasa, Kenya.

North Africa: Explore Africa’s Northern Arabic region, with trade centers that have existed for thousands of years. One itinerary takes you through Egyptian ports near the Pyramids and tombs in Egypt, while another begins in Europe and then proceeds to Casablanca, the Canary Islands, Dakar, Gambia, the Ivory Coast, and Ghana.

Expedition Cruise: Get an in-depth perspective of the Atlantic Coast. A perspective away from the major landmarks and tourist attractions leads travelers into local cultures and wildlife. Stop to observe rare birds, butterflies, and monkeys, or find out more about voodoo religion in the many small villages dotting the West African coast. Silversea travels from Cape Town to Dakar over 23 nights.

If you’ve always wanted to visit Africa, see as much as possible with a Silversea cruise. Select a region and corresponding itinerary before scheduling your adventurous voyage through Direct Line Cruises.