Thousands of years of history, world-renowned cuisine, and beautiful oceanside towns to bask in the Mediterranean sun – all of this and more awaits travelers on a Royal Caribbean cruise to Europe. 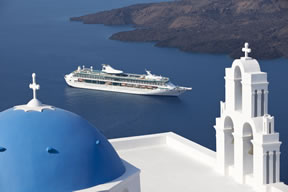 What appears as the quintessential sights and attractions on a brochure essentially come to life onboard, with ships traveling along the continent’s coast to stop at several well-known ports – in terms of history, taste, and sights. If you’ve always wanted to explore the other side of the Atlantic without having to make travel reservations between countries and towns, a cruise onboard Royal Caribbean makes the trip of a lifetime.

Still, as many ports dot the coastline, seeing the whole continent isn’t possible in one voyage. And after all, why see it all in one shot when you can savor each area with a different trip? 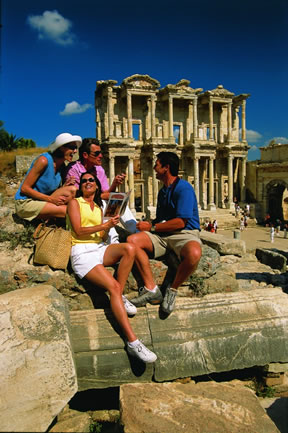 • Eastern Mediterranean: Did Greek history, or Italian art grab your attention in school? Have you always wanted to taste the pastas of Italy and the seafood of the Mediterranean? Royal Caribbean presents itineraries perfect for history, culture, and cuisine buffs, with trips lasting at least seven nights.

Greece is often a focal point, with ships beginning in Italy and then traveling to the Isles. Depending upon length, a stop in Montenegro or Croatia may be in between, and then later, the ship may pass into Turkey.

If you’ve wanted to experience some of the most well-known historic and modern sights, now’s your chance: Itineraries frequently include Rome, Athens, Mykonos, Argostoli, Santorini, Rhodes, Istanbul, and Sardinia.

• Western Mediterranean: While the eastern portion of the Mediterranean packs in history, culture, architecture, and dining, the western half has equally-memorable sites in France, Spain, and Italy. From ancient history to the Cannes Film Festival, there’s truly something for everyone. Although combinations vary, popular ports of call may include Barcelona, Marseilles, Nice, Florence, Rome, Naples, Monte Carlo, Croatia, and Montenegro.

• Northern Europe: England, France, Scandinavia, Russia – tying each of these seemingly-different countries together is a Royal Caribbean cruise. Although one single trip may not cover the continent’s colder region, these typically 12-night excursions frequently begin in England and then go either way.

To one end, the cruise opens the door to Scandinavian and Eastern European cultures. Ships may stop in Copenhagen, St. Petersburg, Helsinki, Stockholm, and Estonia. Or, for a more specialized tour, consider an excursion to Norway; although this trip too begins in England, it hits all of the Scandinavian nation’s key points: Kristiansand, Alesund, Flan, and Stavager. 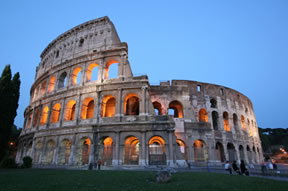 • Transatlantic: A typical European cruise involves planning a flight in advance, usually to the U.K., Italy, or Spain. As seasoned cruisers already know, aligning travel plans requires significant advance planning – or an excellent cruise package. While packages encompassing a flight, hotel stay, and cruise may be found through Direct Line Cruises, travelers have another option: a transatlantic cruise to Europe.

Through Royal Caribbean, these trips take travelers from one continent to another, but the itineraries always vary. Just how different is each experience? In going from one coast to another, a ship may anchor in Paris, Ireland, and Iceland, before ending in Boston. Or, a more southern route takes travelers through groups of islands, including multiple Caribbean nations and the Azores. Farther down, a Brazil to Spain connects passengers from South America’s coast to Europe.

Keep in mind that transatlantic cruises tend to last longer – at least 12 days, depending upon itinerary – and ships taking these lengthy routes frequently change.

An experience of a lifetime awaits – from a week-long excursion in the Mediterranean to a transatlantic voyage. What’s holding you back? Start planning your European cruise vacation today through Direct Line Cruises.