Summer weather while the northern hemisphere experiences winter, unique wildlife, surfing and snorkeling near the Great Barrier Reef, and spending time in one of the world’s major cities – that’s what awaits travelers onboard a Royal Caribbean cruise to Australia, New Zealand, and the South Pacific.

Recent years saw cruise markets in this part of the world open up; as such, Royal Caribbean expanded to include a choice of cruise itineraries – some focusing exclusively on the single-country continent, others exploring both Australia and New Zealand, and longer trips expanding out to New Caledonia, Vanuatu, and Fiji. Depending upon the adventure you’re seeking, an Australian cruise through the comfort and familiarity of Royal Caribbean makes the perfect chance to experience the South Pacific. 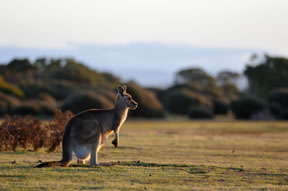 Places to See and Things to Do

In general, Australia’s characterized by a warmer climate, a more arid atmosphere, particularly if you venture into the Outback, and places along the coast for surfing – one of the nation’s top sports – or snorkeling and scuba diving. The continent, as well, boasts its own species of wildlife found nowhere else in the world – koalas, kangaroo, and wombats, just to name a few.

Although just a ship ride away, New Zealand presents an overall contrasting character – one laidback and strongly defined by English and Scottish influences. Prepare for more rain and greenery. But like Australia, New Zealand is home to species found nowhere else, including kiwi birds and the largest penguin Diaspora. 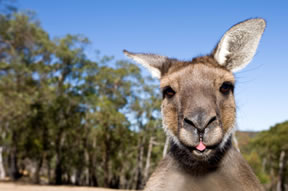 But with several ports spread over a range of countries, what are some of the attractions you’ll see with a Royal Caribbean cruise?

• Auckland:
New Zealand’s capital city is home to the southern hemisphere’s tallest urban structure, the Sky Tower, but is within close distance of the countryside, where you’ll likely see sheep farms. The “City of Sails” further presents opportunities for bungee jumping and salt water fishing.
• Ayers Rock:
This majestic rock formation juts out of the Outback’s desert sands, standing at a height of 1,000 feet. A closer look – one you may experience through a cruise excursion – reveals several springs, waterholes, and caves.
• Cairns: An Australian port in Queensland, this location opens the door to exploring the country’s breathtaking lagoons, wetlands, and rainforests, as well as its native flora and fauna. Schedule a trip to the Rainforestation Nature Park, if time permits.
• Port Douglas: This seaside fishing village sits right by the Great Barrier Reef – one of the most sought-after locations in the world for underwater exploration enthusiasts. Take an opportunity to swim or snorkel in the area, which is home to 1,500 species of fish, 5,000 species of mollusk, and 400 species of coral. 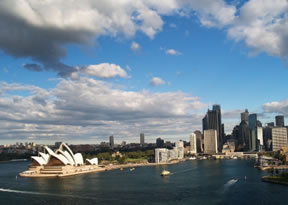 • Queenstown: If the X-Games aren’t exhilarating enough, it’s time to see Queenstown, known as Australia’s Adventure Capital. During the day, schedule an excursion to hike, bike, go camping, bungee jump, ski, or fly fish, and in the evening, cool off and explore the area’s many nightlife options.
• Rotorua: Travelers come to this Australian port to see its unusual geothermal activity: mud pools, geysers, hot springs, botanical gardens, and environmental nature reserves.
• Sydney: When it comes to activities in Sydney, Australia’s major urban center is open to practically anything. Travelers frequently request to explore the well-known sites: Oxford Street, the Sydney Opera House, and the Sydney Harbour’s bays and beaches.
• Hobart: Right at the foot of Mount Wellington, this Australian location reflects its colonial heritage, with Georgian and Victorian mansions and the country’s oldest road bridge.
• Tasmania: The “Island of Inspiration” contains multiple protected national parks and reserves, which cover roughly 45 percent of its area.
• Wellington: New Zealand’s cultural capital claims to offer just as many restaurants per person as New York City. Along with dining, explore the area’s many boutiques and theaters while your ship’s in port. 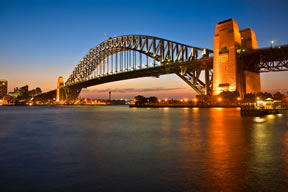 One trip may not encompass all possible destinations listed above, but as a general guide, Royal Caribbean offers the following basic itineraries to Australia:

• Starting in Sydney: Trips go from this major Australian city into the South Pacific, from Australia to New Zealand, or start here and go around the continent’s coast.
• From Singapore: A longer, one-way cruise begins in Singapore, stops at multiple Australian ports, and ends in Sydney.
• Transpacific: With Royal Caribbean cruises departing from Hawaii, travelers get to experience several South Pacific nations, including Fiji and the Samoas, and then finish in Sydney. Are you a wildlife enthusiast?

Are you looking for exhilaration and great thrills? An Australian cruise through Royal Caribbean meets these expectations and goes far beyond. After determining the best itinerary, start looking for deals and planning your once-in-a-lifetime trip through Direct Line Cruises.