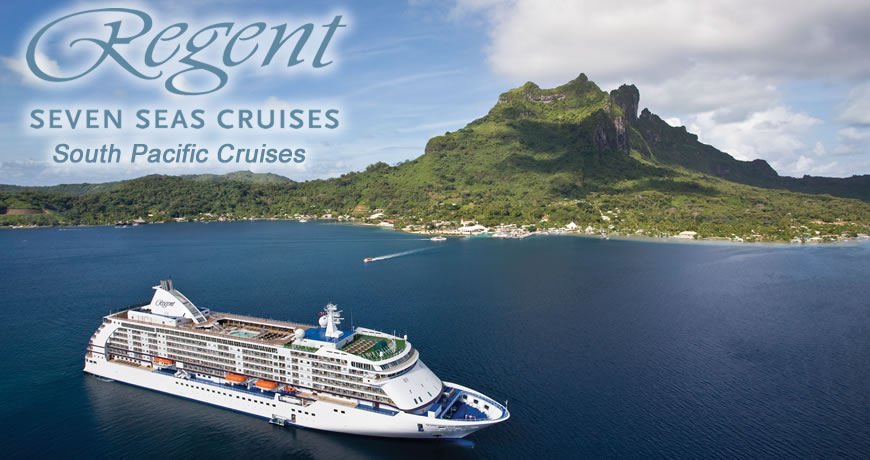 Tahiti has inspired artists across a range of disciplines – film, stage, and painting, just to name a few. But what sights have drawn so many to this French Polynesian paradise? Rather than dream about it, find out with a Regent Seven Seas Cruise to the South Pacific.

While many other contemporary and luxury lines focus on Australia and Hawaii, Regent’s South Pacific cruises traverse the entire region. The Mariner takes travelers from the surrounding continents – North America, South America, and Australia, to be precise – across the ocean, and more than not, passes through or finishes in Papeete – French Polynesia’s main city that also happens to be located on Tahiti.

With Regent, nearly all cruises last 16 or more days and finish in Papeete. Common itineraries include:

With these transpacific trips, Regent lets passengers explore the worlds of Vanuatu, Hawaii, Fiji, and Samoa.

Fiji: Sailing through this archipelago not far from Australia, Regent typically stops in the bucolic Lautonka and the more urban Suva. In the process, blue lagoons surrounded by white sands become fodder for exploration, and you have a chance to see the largest city of the South Pacific outside of Australia and New Zealand.

Vanuatu: Port Villa and Champagne Bay set up a small country of contrasts. In one, explore the city side of this island country; in the other, get to know some of the world’s most beautiful beaches, known for their reefs and proximity to the jungle.

Bora Bora: A lagoon sits at the center of a coral reef and several inlets. Exploring leads you to multiple small villages, archeological sites, and World War II locations.

Moorea: A beautiful blue bay rests adjacent to volcanic peaks. This spot’s a must-see for diving.

Nuka Hiva: Ancient Polynesians inhabited this point from 150 B.C. to the present, but its landscape has inspired artists over the centuries. See it – a land of 3,700 ft. mountains, rivers, and the world’s third-largest waterfall – for yourself.

Pago Pago, Samoa: The capital of American Samoa has been inhabited since 600 B.C., and more recently played an essential role in World War II.

Papeete: The French Polynesian capital and largest city connects you with the country’s urban center and the more picturesque landscapes of Tahiti.

Raiatea: French Polynesia’s seconds-largest island surrounds a lagoon, but a closer exploration yields a landscape of waterfalls and vanilla plantations.

Rangiroa: The largest of French Polynesia’s Tuamota archipelago creates the backdrop for a landscape of small villages, interior lagoons, and fish and black pearl farms.

The South Pacific offers too many wonders and stunning, awe-inspiring landscapes to just pass through. Explore it in all the detail it deserves with a Regent Seven Seas cruise. Book your trip today, all while finding deals, through Direct Line Cruises.