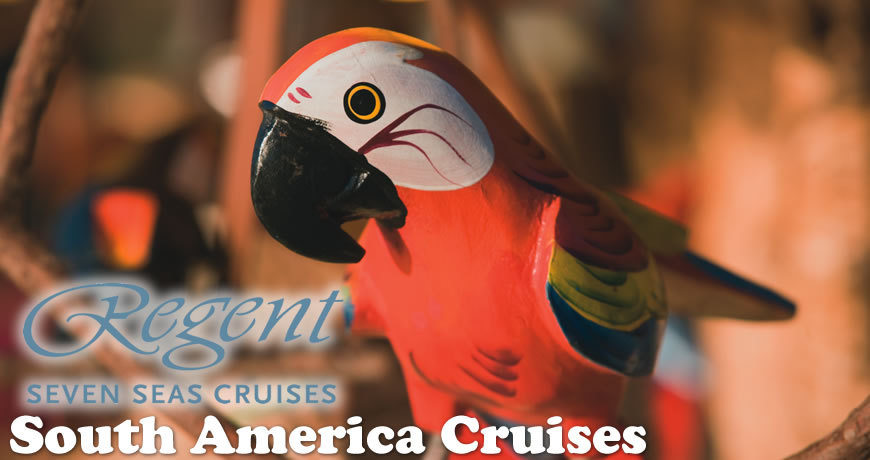 What appears as a typical assortment of itineraries at a first glance delves deeper into the culture of South America.

Sophistication meets exploration as you travel around Cape Horn, in going from Buenos Aires to Lima. European-influenced architecture transforms into towering fjords, which themselves become the grandiose Andes Mountains, home to Incan Ruins.

Or for a new perspective, Regent Seven Seas explores the Brazilian coast – known for its miles of beaches bordering the Atlantic – up to the Amazon. The river takes travelers into a different world of rubber boom towns, dense jungle, and European-style landmarks, like the Teatro Amazonas.

But what sets Regent apart is the variety and number of stops. The Mariner, making all South American routes, is just as likely to visit one of the continent’s major cities, as it is to put anchor down in the many small towns between, be it on the shores of the Amazon, in the Andes, or along the stunning Brazilian coastline.

South America’s cultural melting pot characteristics, beautiful landscape, and well-known cultural characteristics – Carnival, the Samba and the Tango, and Argentinean cowboys, to name a few – attract travelers from all over the world. Get an intimate look, all with the support of luxury accommodations and an attentive staff, through Regent.

Lima to Buenos Aires or Rio De Janeiro: These trips go through smaller Peruvian and Chilean ports, including Pisco, Matavan, Iquique, and Coquimo, before stopping at the major city of Valparaiso. The ship then travels through the lengthy lands of Patagonia, known for its mountains and fjords, before going around Cape Horn to Ushuaia, the Falkland Islands, Montevideo, and Buenos Aires.

Argentina to Brazil: The cosmopolitan character starts off this trip, which tours the eastern coast’s major cities, including Montevideo and Rio De Janeiro. In between, get ready to explore Brazil’s many scenic beaches – some on land, others on islands in the Atlantic – of Porto Belo, Santos, Paraty, Ilha Grande, and Buzios.

Transatlantic: Regent travels north up the eastern coast, making several stops in Brazil before touring the Amazon. After, the Mariner crosses the Atlantic to continue to cruise in Europe.

Buenos Aires: Travelers from all over the world yearn for Buenos Aires’ classic character – one earning the city the distinction of “Paris of South America.” Like many urban centers, restaurants, museums, and galleries introduce you to the local culture, but as you’re in town, consider learning about the tango and visiting the well-known Teatro de Colon.

Ushuaia: This city considered the world’s southernmost sits not far from Tierra Del Fuego. While the location’s certainly a major draw, duty-free luxury shopping is another attraction.

Ilha Grande: The ocean laps against the sand of a coast not far from the rainforest. But this particular island features 200 beaches and trails perfect for exploration – be it by hike, kayaking, or snorkeling.

Paraty: Brazil’s colonial past prominently emerges in this port’s architectural style. As the town’s essentially a group of islands, it’s considered a must to explore by schooner.

Porto Belo: What seems like a small fishing village at first sight is a Brazilian beach town not far from the mountains.

Rio De Janeiro: Travelers prefer to visit during Carnival season, but Rio De Janeiro is perfect at any time of the year. See the landscape from above with a cable car ride up to Sugar Loaf, or explore with a tour of Tijuca Forest. And of course, there are some of the world’s most well-known beaches, such as Copacabana and Ipanema.

Ever consider visiting South America? See all there is to experience, while doing it in luxury, with Regent Seven Seas. Find a trip matching your travel plans, and then book it through Direct Line Cruises.