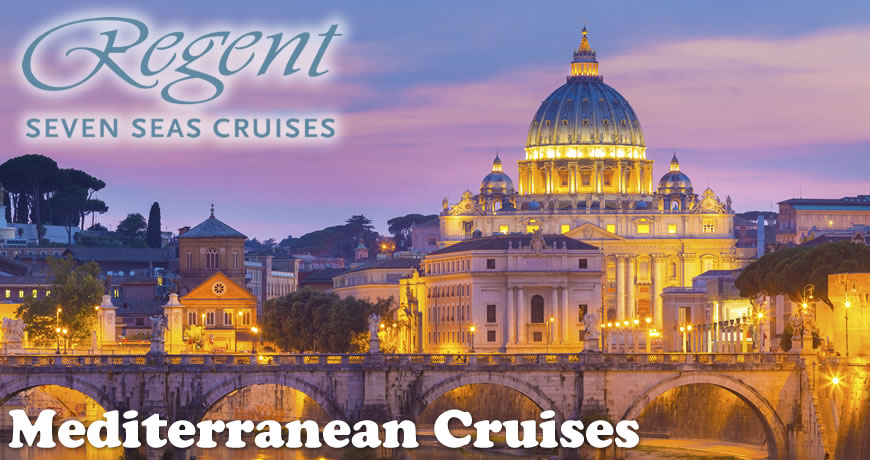 The azure blue waters remain the same, but the culture doesn’t. Just look at history – from the rise of the Roman Empire in Italy to the Ottoman Empire in present-day Turkey, to the Greeks changing art, philosophy, war, and religion as we know it – and you’ll see that the Mediterranean is a beautifully varied region in more ways than one.

Regent Seven Seas, with its smaller ships of luxury accommodations, realizes this in the greatest way possible. The Voyager and Mariner ships take the standard Eastern and Western routes, but then intentionally venture off course. This may be taking a longer path – one covering multiple regions, leaving the Mediterranean to explore the Black Sea’s Biblical history and resort towns, or sailing across the Atlantic. No matter the route, it’s an experience to behold, for its cuisine, history, culture, architecture, and experiences.

Regent cruises lasting seven nights or longer take one of the following types of routes:

Eastern: How familiar are you with Greco-Roman history? Need a refresher course? Rather than go to the classroom, come aboard this cruise.

Ships frequently begin from mainland Italy, typically Venice or Rome, before sailing across the Adriatic to multiple ports in Croatia. Stops to take in the resort atmosphere of these coastal Balkan towns, like Split, Kotor, and Dubrovnik, transition into the sun-drenched landscapes of the Greek islands. Here, depending on itinerary, you’ll see the dual Greek historical perspective – knowledge versus war – and find it juxtaposed with modern culture. Ports may include Corfu, Santorini, Athens, and several others.

Certain cruises continue to Ephesus and Istanbul in Turkey, while longer trips venture past to the Black Sea.

Western: What kind of cruise lets you learn about modern art, historical architecture, and see the spots where celebrities sunbathe? A Western Mediterranean cruise.

The French Riviera, with ports including St. Tropez, Cannes, and Monte Carlo, is always a highlight, but away from the beaches, there’s history in Barcelona and Marseilles, a detour to Ibiza, Spain’s vacation paradise, and stops to continue exploring more art, museums, architecture, and history in Lisbon, Seville, Gibraltar, and Monte Carlo.

Black Sea: Alone or an extension of an Eastern Mediterranean cruise, the Black Sea is connected to this other major body of water. But character wise, it couldn’t be any more different. Stops like Nessebar, Constanta, Odessa, Yalta, Sochi, Trabzon, and Sinop introduce you to the vacation world of Eastern Europe and the Middle East, as well as to the supposed site of Noah’s Ark.

The Holy Land: Beyond Greco-Roman history and the Ottoman Empire, the Mediterranean region is home to some of the world’s oldest religions. As a result, Regent offers a handful of Holy Land itineraries that start in Athens, proceed onto Turkey and Cyprus, and then allow travelers to visit Jerusalem’s many significant sites.

How you visit the Mediterranean is your choice – but Regent presents the detail and the luxury many travelers seek out. Find an itinerary that suits your travel goals through Direct Line Cruises, and then make a reservation today.