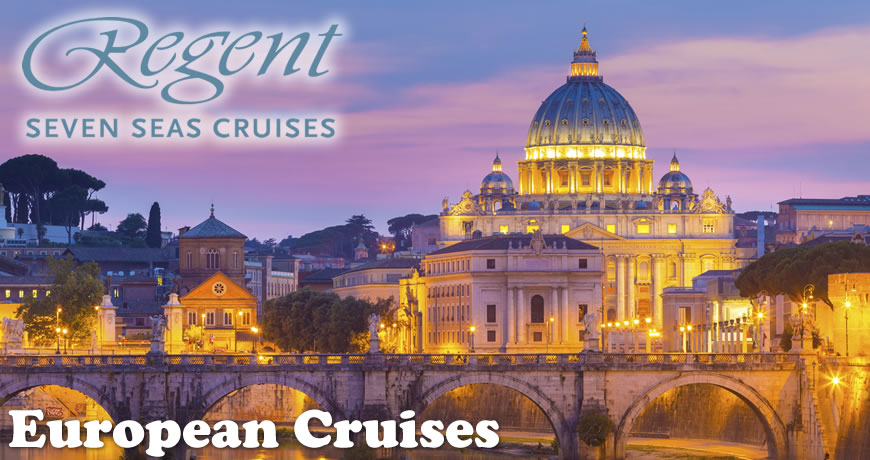 Northern Europe, including the Continent and Scandinavia, is said to have inspired countless fairytales, and with palaces, castles, and stunning landscapes to explore, that notion is very evident.

But Europe is so much more, and a cruise through Regent Seven Seas does more than a quick run through but offers a unique perspective, depending upon itinerary.

The Voyagers’ trips lasting seven nights or longer take a tour through the major cities stretching from the Netherlands to Russia or sail through the natural wonders. This may be meandering through Norway’s intricate waterways to get an immersive experience of its fjords or crossing the Atlantic to Iceland, known for its unusual yet warm and breathtaking geothermic landscape.

In and Around the Major Cities: Several Regent itineraries draw a line across the continent, sailing from one major city to the next and, in some cases, visiting the smaller ports in between. You’ll have a chance to take in each country’s cosmopolitan character and history, in some cases dating back centuries. Stops may include London, Bruges, Amsterdam, Copenhagen, Stockholm, Helsinki, St. Petersburg, Tallinn, Berlin, Oslo, Kristiansand, Karlslrona, Mariehamn, Gdansk, and Klaipeda.

Certain trips may focus more on the Scandinavian coast, including more ports in Sweden and Norway, before sailing to Iceland.

The British Isles: Alone or as part of a Continental cruise, Regent’s trips to the British Isles encircle the U.K. and Ireland. As you take in English, Scottish, and Irish culture, from its Royal history to modern music and sports, you’ll visit Edinburgh, London, Cork, Belfast, Kirkwall, Glasgow, and other ports around the perimeter.

Around Western Europe: Regent begins on the northern part of the Continent, with popular stops in Amsterdam, Berlin, and Bruges but then continues south toward the Mediterranean. As you sail through France, Spain, and Portugal’s major ports, ending in the French Riviera, Italy, or even Turkey, depending upon itinerary length, you’ll see history, culture, and temperature changes unfold.

Copenhagen: This Danish city is, believe it or not, Europe’s oldest capital, dating back to the 12th century. These days, it’s a cultural center in Scandinavia, with many museums and art galleries.

Helsinki: Finland’s culture and commerce capital offers one of the most easily-navigable layouts of any European city. Its spacious streets, in turn, lead you to gardens, parks, and many neoclassic buildings.

Berlin: Regent begins in the Warenmunde district, a sea resort on the Baltic, before taking you to the German capital.

Belfast: A rugged coast and beautiful landscape lead into a town still bearing signs of the Middle Ages. For entertainment, consider its many pubs along the Golden Mile.

Cork: This town began as a 7th century monastery and settlement. While you’ll learn about its history in port, today, most of the city displays 18th and 19th century architectural styles.

Dublin: The Irish capital started as a Viking settlement, and today, one-third of the country’s population resides within its borders. It’s also the birthplace of many world-renowned literary figures.

Amsterdam: While this small Dutch city is known as one of Europe’s most liberal, it’s also one of the country’s culture capitals, with 140 art galleries and 40 museums within its borders.

Oslo: This Norwegian capital sits near hills and peaks and offers a 900-year history. Today, that period of time is evident in the several architectural styles composing its character.

St. Petersburg: As Russia’s capital for 200 years, St. Petersburg now features many cathedrals and churches dating back centuries, as well as modern cultural attractions like the ballet and museums. Regent further offers trips to Moscow and to Catherine’s Palace.

Stockholm: The largest city in Scandinavia is spread out over 14 small islands. As well, many consider it one of the world’s most architecturally advanced. See it for yourself while visiting both modern and historic attractions during your time in port.

There’s much to see in Europe, so why not experience it in one shot with a cruise? Book your trip today after finding an itinerary through Direct Line Cruises.