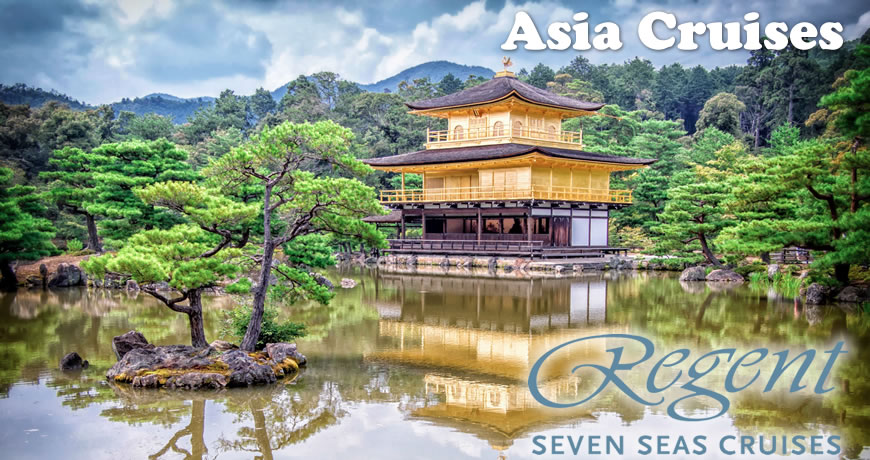 Asia’s growth as a cruise market has been explosive, and now many U.S. and Europe-based lines offer trips lasting a few days to a few weeks to the region. Within the luxury sector, Regent Seven Seas stands out within the Asian cruise market for a number of reasons: Ships cover the entire continent, trips last a few weeks or longer, and itineraries cover both the major cities and smaller ports in between.

Asia itself has turned into a desirable location for travelers across the world. Southeast Asia’s renowned beaches, from Phuket, Thailand to parts of Vietnam, Malaysia, and Indonesia, are highly sought after, be it for relaxing and enjoying the scenery or having a unique underwater experience. Growing cities in East and South Asia and the Middle East further attract cruisers looking for history blended with modernity. From Shanghai to Dubai, such experiences await.

Regent’s Voyager makes the following types of itineraries in Asia, which last 6 nights or longer:

Across the Indian Ocean: A shorter world cruise, this trips starts on Africa, spending time in the southern region before sailing to the Indian subcontinent. You’ll explore Sri Lanka’s beauty and history before jetting off to Southeast Asia’s popular ports: Phuket, Penang, Singapore, Kuala Lumpur, and Langkawi.

Southeast Asia: Why only get the big picture when you can look at the details in between? Regent offers one of the most immersive Southeast Asian itineraries. Of course, you’ll stop at Singapore, Kuala Lumpur, and Phuket, but Regent takes you farther. Taste delicious curries, lounge on beautiful beaches, and explore urban and jungle landscapes in Danang, Saigon, Hanoi, Bangkok, Ko Samui, Kota Kinabalu, and Muara.

Southeast Asia to East Asia: After Regent explores the wondrous and varied ports of Southeast Asia, the Voyager continues up the coast to China’s, Korea’s, and Japan’s major cities. From towering skyscrapers to Shinto influences in Japan, amalgamations of the past and present, of modernity and religious-influenced cultures emerge in Shanghai, Beijing, Seoul, Hiroshima, and Kyoto.

Longer cruise itineraries may return to Southeast Asia, taking a different route with stops in the Philippines and Japanese islands Okinawa and Ishigaki.

East Asia: Spend longer exploring the confluence of the world’s growing cities with some of the world’s oldest cultures. No matter if you’re exploring the grandness of Shanghai or taking an excursion over to the Great Wall of China by Beijing, such a characteristic pervades many East Asian ports. Regent provides a detailed look at the region, with stops in Hong Kong, Kaohsiung, Taipei, Tokyo, Kagoshima, and Busan, in addition to those listed above.

Middle East to Southeast Asia: Regent is one of the few cruise lines to offer a cross-continental trip. Itineraries begin in the ancient mysteries and grand cities of the Middle East, such as Dubai and Abu Dhabi, before going around the coast of the Indian Subcontinent and Southeast Asia, before finishing in Hong Kong.

The Middle East: Asian cruises just aren’t about the Eastern region – and Regent understands this. Trips encircle the peninsula, with stops in Dubai, Muscat, Salalah, and Petra, before traveling through the Suez Canal to Jerusalem and the Mediterranean region.

However you wish to see Asia, Regent has an itinerary. Find the best match, and then book your luxury trip through Direct Line Cruises.