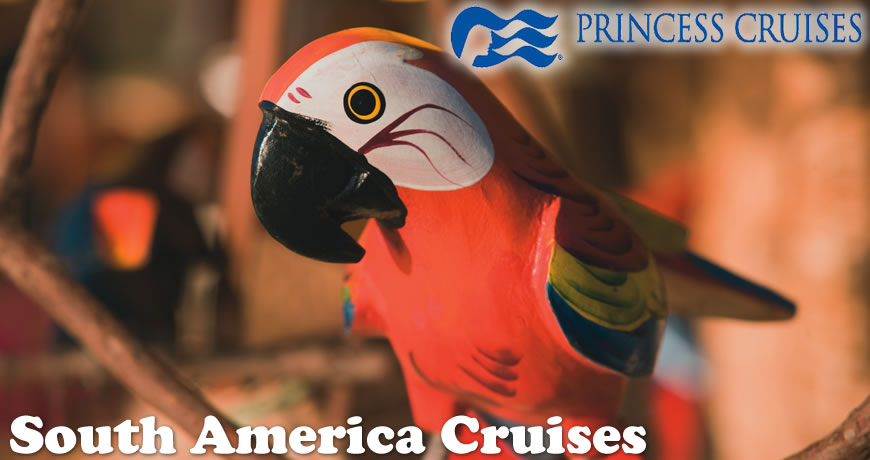 From the warm and beaches of Rio De Janeiro to the near-Antarctic temperatures around Cape Horn, a South American cruise on board Princess introduces you to all of the continent’s facets.

Named by Recommend Magazine as one of the “Best Itineraries” for the past nine years, Princess makes several major stops as it goes around the perimeter: Rio De Janeiro, where cruisers stay for two days, Buenos Aires, Ushuaia, Santiago, and Lima.

Two ships take two possible itineraries, both of which sail around Cape Horn:

Princess’ trips to South America are cruises alone or as part of a longer voyage. Those staying solely around the continent include:

From Santiago: This Chilean starting point introduces cruisers to South America’s colonial character, as well as its major wine region and resort towns before traveling around Cape Horn. The trip terminates in Rio De Janeiro.

From Buenos Aires: A longer stay in the Argentinean capital means more chances to explore the local culture. For Buenos Aires, this is Argentina’s cowboys juxtaposed with Belle Epoque Palaces, European-style architecture, and the birthplace of the tango. From here, the ship goes around Cape Horn to travel farther up the South American coast to Lima, San Juan Del Sur, and Costa Rica. In the process, you’ll get to observe wildlife on the Falkland Islands, see the beauty of Patagonia’s fjords and mountains, and explore Tijuca Forest.

Out of these two possibilities, the Golden Princess lasts 14 to 31 days at sea, with an overnight stay in Buenos Aires. The Crown Princess takes travelers on the cruise line’s Grand Adventure of South America, which lasts 30 to 49 days. All offer the opportunity of land and sea vacations, allowing travelers to spend more time in South America’s major landmarks.

From the rainforests of Brazil and the beaches of Rio to Chile’s stunning fjords and Peru’s prominent Inca ruins, there’s an eye-opening excursion in every port. Although each location allows you to taste the cuisine, learn about the culture, and take in the local landscape, Princess’ trips take cruisers to two well-known landmarks:

Iguazu Falls: Waterfalls wider than Niagara stretch from Brazil into Argentina – and you can see this stunning sight from both sides. Afterwards, sail to Rio De Janeiro to soak up the sun or take in Brazil’s coastal landscape.

Machu Picchu: The Incans made up one of South America’s most powerful empires, and Princess lets you explore this side of the continent’s history with a trip to Machu Picchu, a city of fortresses in Cusco. Afterward, travel to current capital Lima to marvel at the classic architecture. Both locations are UNESCO World Heritage Sites.

A diversion toward warmth, culture, and history makes a South American cruise with Princess a must for the winter season. To begin making plans to experience this corner of the world, start making reservations and finding deals through Direct Line Cruises.