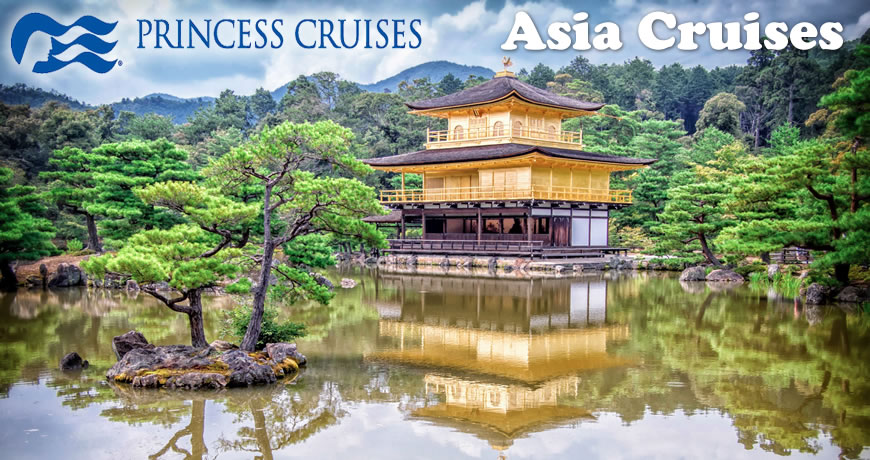 History, centuries’ old religions immortalized by ruins, expanding metropolitan areas, and delicious cuisine known throughout the world – you’ll likely see these sights and more with a Princess cruise to Asia.

Princess covers this corner of the world – one of the burgeoning cruise markets expected to see more than 3 million passengers per year – with three possible cruise itineraries and six ships:

Trips concentrate on China’s coast and the ports within northern Southeast Asia. With Princess earning “Best Cruise Line in Asia” from the Women’s Choice Awards for this itinerary, trips begin in Beijing and then go as far south as Singapore.

In between is a wide range of cultural facets, sights, and taste. In China, excursions take cruisers to some of the wonders of the world, including the Forbidden City, the Great Wall, Summer Palace, and Temple of Heaven.

From here, ships go south to Shanghai, Bangkok, Ho Chi Minh, and Brunei on the island of Borneo. Along the way, you may see the Emerald Buddhist Temple in Bangkok, subterranean temples in Vietnam, the world’s largest mosque in Brunei, and the breathtaking landscapes of Ko Samui, Malaysia.

As well, Singapore, frequently where the cruise ends, is a cultural hub all of its own – a melting pot of nationalities within a bustling metropolis not far from the beach. At this stop, Princess presents the opportunity to shop and taste the varied cuisines.

Although ships stop in China and Southeast Asia, Japan receives the most emphasis with this itinerary – which was named “Best Asian Itinerary” by Porthole magazine.

For those that don’t know, Princess is the largest North American cruise line in Japan and leaves from three ports: Tokyo, Kobe, and Otaru. On board the ship, travelers have the opportunity to taste the local cuisine, including noodle bars, tea, and sake tastings, and experience Japanese entertainment.

If you’re looking to experience the sights of Southeast Asia and venture further into Indonesia, this is the itinerary to select.

Although ports overlap with the China to Southeast Asia itinerary, Princess takes a more detailed look at the region. From the multicultural port of Singapore, ships to sail to Brunei, Bali, Bangkok, Penang, and Ho Chi Minh.

Get a glimpse into Southeast Asia’s varied culture from the start, from Chinese and Indian influences in Singapore and Malaysia to the various islands of Indonesia. In port, schedule an itinerary to tour and explore sites and temples from ancient kingdoms, or to experience the majestic and mysterious landscape of rice paddies, limestone cliffs, and beautiful beaches.

From the landscapes to the unique tastes and thriving urban centers, there’s much to see in East and Southeast Asia when you travel aboard Princess. To start planning, schedule your trip, pick an itinerary, and get a deal through Direct Line Cruises.