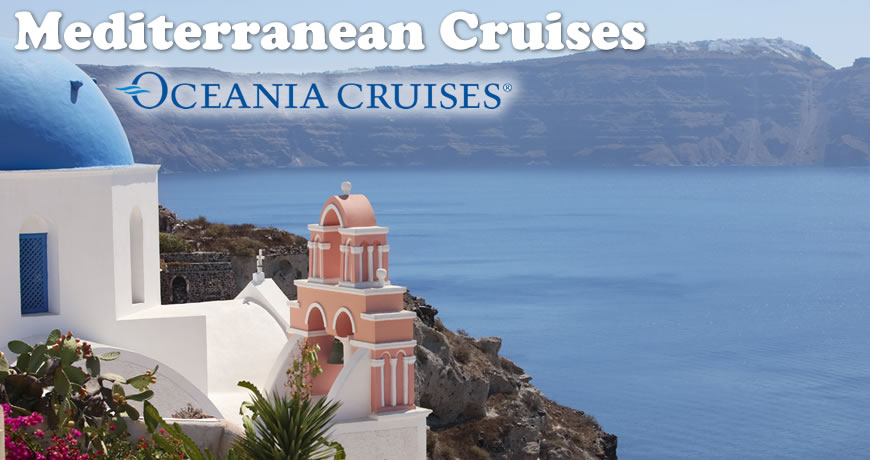 Oceania Cruises to the Mediterranean

No single sentence sums up the Mediterranean region – especially when you explore it with an Oceania cruise.

Historically, many of the world’s major empires rose and fell around this body of water – the Greeks, the Romans, the Byzantine Empire, Carthage, the Egyptians, the Phoenicians, and the Ottoman Empire – and the Renaissance then gave way to definitive works of art. Oceania’s detailed itineraries and shore excursions get you close to each facets, be it a tour of mosques in Turkey, pyramids in Egypt, or Roman ruins in Italy.

Three ships – the Riviera, Nautica, and Insigna – go along the coast that transitions from the high life of Monte Carlo to the channels of Venice to the historical sites dotting the Greek Isles.

Ancient temples on Malta contrast with modernist architecture in Barcelona. Along the French Riviera, you’ll take in the gorgeous sun, while possibly spotting celebrities. With Oceania’s ships, small towns full of terracotta houses and old world charm aren’t off limits, and dining – be it on the ship or in port – always consists of fresh, local ingredients.

Explore remnants of ancient empires, no matter if you’re in Sicily, Giza, Istanbul, or Jerusalem. Stops from Italy to Turkey offer insight into the centuries of changing history surrounding this majestic sea. In the process, you’ll get up close to Roman, Byzantine, Bronze Age, and Minoan history and civilization.

Oceania further goes into detail through Greece. Rather than stop in Athens and a few other locations, the smaller ship size takes you to several ports within the islands spread out between Europe and Asia: Nauplion, Kos, Heraklion, Santorini, Mykonos, Crete, Rhodes, and Kusadesi, to name a few.

From here, cruises continue into the Middle East to Dubai or enter the Black Sea region for another historical perspective. Although the towns surrounding this smaller body of water tend to cater to Eastern Europeans on holiday, the region is considered the Biblical location for Jason and the Argonauts and Noah’s Ark. Learn about this perspective as you visit Constanta, Sochi, and Sinop.

There’s so much to the Mediterranean – so which perspective fits your vacation plans? Find it through Direct Line Cruises.