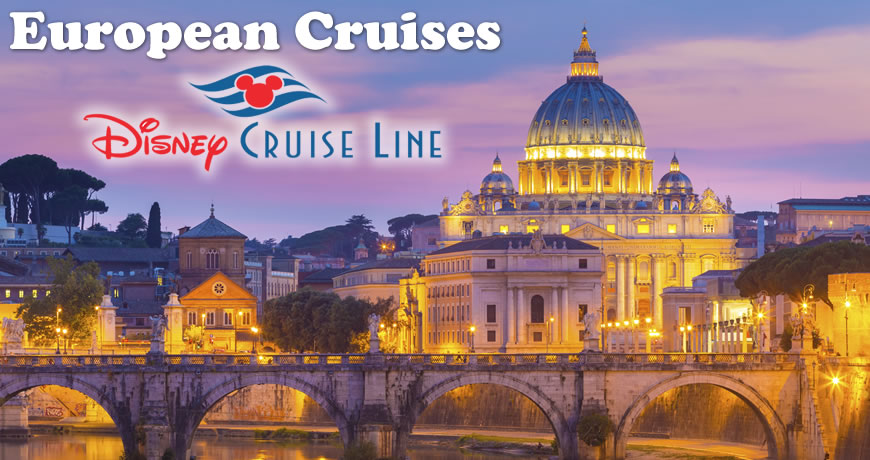 Get a familiar perspective on an entirely new experience. Disney Cruises travels throughout all regions of Europe – Scandinavia, the Baltic Countries, and the Mediterranean – to give you an insightful, fun perspective on major cities and ports around the coast.

More trips focus on the northern landscapes – a breathtaking sight from the ship and even more engrossing once you walk through – and additional Mediterranean ports have been added to the itinerary.

Depending on itinerary, trips last for four to 12 nights at sea. Each comes with Disney’s familiar combination of varied dining on board, Character Greetings, and personal service, as you enjoy Europe’s familiar landmarks.

The former, with a focus on Norway’s fjords, is new for 2015. As ships cruise through several Norwegian ports, travelers have the chance to view some of the world’s most beautiful frozen landscapes. Terrain of fjords, mountains, and geysers is perfect for picture-taking and exploring through a number of methods. With various shore excursions, you can hike, take a walk on a glacier, cycle, or even go fishing.

At the same time, although emphasis is strongly placed on natural wonders, you and your children will have a chance to learn about Viking history.

Aside from this area, Northern European cruises from Disney travel between major ports on the continent and in the Baltic countries. Explore history and various cultures in Copenhagen, Russia, Sweden, Norway, and Finland. Excursions include tours to royal palaces, cathedrals, museums, and theaters.

Mediterranean: Ships depart from either Barcelona or Venice to sail through the blue waters and balmy weather of southern Europe. A romantic atmosphere pervades as you explore some of the world’s oldest civilizations and diverse cultures.

Interested in seeing more of the continent? Instead of sticking with the standard journey, sign up for Adventures by Disney. VIP services and immersive excursions go past the standard landmarks to provide a fuller, more comprehensive look at Europe.

Explore this continent’s history and culture with Disney. To begin, select an itinerary and book your trip in advance through Direct Line Cruises.