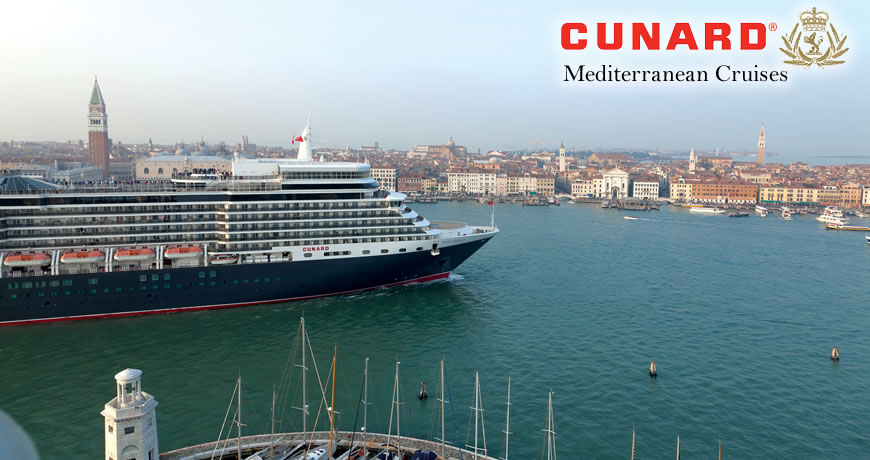 Cunard Cruises to the Mediterranean

Modern civilization flourished in the Mediterranean. Many of history’s major empires – Greek, Roman, Ottoman, Egyptian, and Carthaginian – began and greatly expanded around this vast body of water.

Today, the nations and cities around its coast mark a different turn in history – one in which major, centuries’-old preserved architecture coexists with modern innovativeness, traditional cuisine, pop culture, and fashion. A cruise across the Mediterranean’s immense and varied coast, as a result, is essentially a cultural retrospective, touching on the dawn of modernity through beloved cuisines to the Cannes film festival and major fashion houses in Florence.

Taking it all in, especially through a detailed perspective like Cunard’s, proves to be a challenge. As a result, this major luxury cruise line presents three different perspectives.

From Rome: Explore the western and eastern regions of the Mediterranean, with stops between Italy and Spain in one direction and to Greece in another. From this historical port, go to Corfu, Kotor, Dubrovnik, and Venice for one itinerary. For another, travel out to Iberia, getting to know Livorno, Monte Carlo, the French Riviera, Toulon, and Barcelona in the process.

Athens: Sail around the Greek Isles with this cruise itinerary. While you’ll get to see Naples, Rome, and Valetta, trips blend beautiful beaches and ancient history in Istanbul, Volos, Mykonos, Bodrum, Santorini, and Katakalon.

The Queen Elizabeth, Queen Mary 2, and Queen Victoria sail all above itineraries, with trips lasting seven to 21 days.

Overnight stays and detailed excursions make Cunard stand out from the competition. When it comes to exploring the Mediterranean region, this means you’ll travel far beyond the typical historical landmarks. Once the trip’s done, you’ll have a thorough culinary palette, a good eye for fashion, and more than basic knowledge of the ancient city plans and modern layouts of the region’s major metropolitan areas.

Although excursions vary, the typical Cunard cruise presents the following:
• Exploring some of history’s most notable places, such as the Sistine Chapel in Rome or the Acropolis in Greece.
• Taking leisurely walks through the city to shop, dine, and explore on your own terms.
• Getting to know modern art, including through a stop at the Picasso Museum.
• Absorbing the entire landscape with a panoramic tour
• Guided cultural tours of major cities
• Walking tours, including in Gibraltar, Monaco, and several points in Greece.
• Seeing the land at a fast pace with a 4x4 adventure
• Shopping trips in the world’s fashion capitals
• Culinary tours to explore each city’s flavors
• Intimate visits to small villages

Cunard grades its shore excursions from low- to high-activity levels. To ensure you select the ones you prefer, it’s recommended to schedule them before the cruise departs.

Interested in experiencing history and modern culture up close and together? A cruise to the Mediterranean with Cunard presents the perfect opportunity. Begin your adventure by making reservations through Direct Line Cruises.