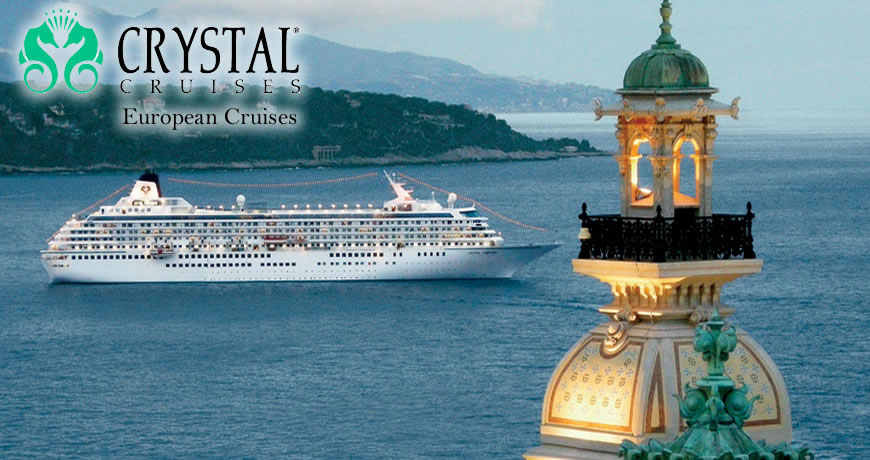 Such a close look at so many angles. That, essentially, describes Crystal Cruises’ presence in Europe, with itineraries touching on the northern region and the Mediterranean.

The Crystal Serenity and Symphony make a range of trips throughout the year. The vessels, holding about 1,000 passengers each, take cruising up to a new level. Not only are the accommodations luxurious, but enrichment opportunities, classes, speakers, and celebrities create an immersive trip, letting you into the intricacies of each port you visit.

At various points during the year, the Crystal Symphony and Crystal Serenity make the following trips:

Scandinavia: Trips around the coast and out to Iceland let travelers into the quintessential aspects of the north. Explore smaller ports along Norway’s coast to see the geographically stunning fjords, or get a cosmopolitan assortment of the area’s major cities, including Scandinavian capitals, Tallinn, and St. Petersburg. See the paths of the Vikings as you explore arts, fashion design, old world history, the cultures of cities and small towns, and the many waterways lining the coasts.

Western Europe: Transition from the cold, rainy weather of the U.K. to the balmy beaches of the western Mediterranean with various itineraries. Rather than select one, Crystal goes around the entire western region of Europe. In the process, you’ll experience a great range of ports from London to Monte Carlo, including larger cities and smaller towns in Spain, Portugal, Germany, the Netherlands, France, and Italy. It’s a cultural, historical, and culinary tour of some of the world’s definitive civilizations all at once.

British Isles: Ireland, England, Scotland, and Wales have developed their own culture and character away from continental Europe. Crystal explores this, from the area’s key cities, like London and Dublin, to important cultural facets, such as the musical British Invasions over the years.

Through various itineraries, Crystal travels between Portugal and Turkey, stopping at ports key in ancient history, modern culture, and artistic and culinary circles.

Italy to Istanbul: Cruises begin in Rome or Venice and then proceed to go around the boot-shaped coastline. Cruisers, in turn, get tastes of Croatia and Greece, including Mykonos and Santorini.

Barcelona to Venice: Begin in one major European metropolis, and then end in another. In between, you’ll visit Monte Carlo, Sicily, Florence, and Rome and have the opportunity to explore some of the world’s key fashion capitals, the Grand Prix, and many historical destinations.

Around Italy: Crystal gives a detailed, comprehensive look at this country. Explore its history in Pompeii, and then go to some of the nation’s lesser-seen ports like Capri, the Amalfi Coast, and Mount Etna.

Iberian Peninsula: Crystal makes several stops in Spain and Portugal, including in Lisbon and Barcelona, before venturing to neighboring countries. See what the French Riviera’s all about in Monte Carlo, visit the Canary Islands, or get a taste of Morocco in Casablanca.

Aegean Sea: Explore some of the world’s key civilizations, with stops in the Greek Isles and Turkey. Today, many ancient ruins exist side-by-side with modern culture.

France and Italy: Stay along the coast for an extensive lesson in art and history. Crystal lets you into the world’s key cultural capitals of Marseilles, Monte Carlo, Genoa, Naples, Rome, and Florence.

No matter the perspective of Europe you’re looking to see, Crystal Cruises has a ship that gets you there. Find an itinerary suiting your travel expectations, and then book your trip with Direct Line Cruises.