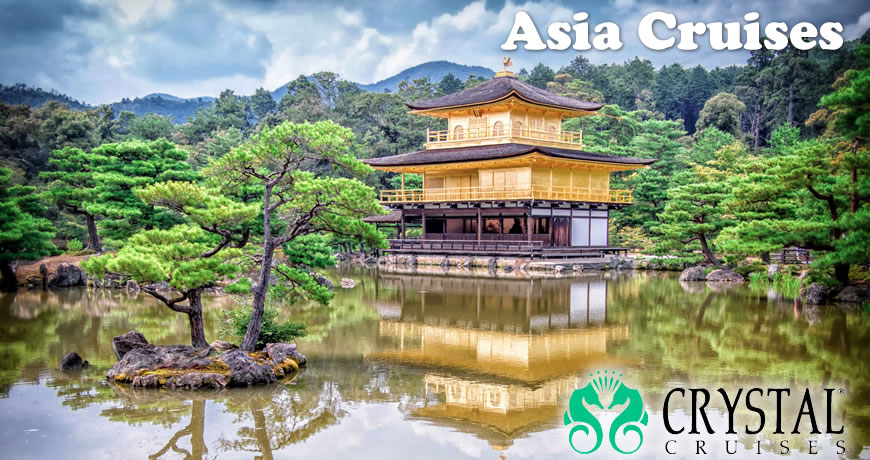 The burgeoning cruise market in Asia attracts travelers from all over the world. Many seek an experience of exciting adventure and exotic culture, between the bustling metropolises of Shanghai and Singapore to the laidback atmosphere and strong Buddhist presence in many coastal towns.

In terms of the luxury market offering intimate glimpses of East and Southeast Asia, Crystal Cruises corners it with an extensive range of itineraries to both major regions and two ships holding around 1,000 passengers each.

Throughout the year, the Crystal Symphony and the Crystal Serenity make trips in East and Southeast Asia, stopping in major cities and coastal towns, blending in-port excursions with enrichment opportunities on board, and, in certain cases, sailing back to North America through a comprehensive look at the north Pacific Ocean.

Practically every corner from Australia through the South China Sea gets explored with Crystal through the following itineraries:

Southeast Asia: Various itineraries between the mainland and islands introduce and then give an in-depth perspective to the region’s facets, from multiple religions, delicious cuisines, some of the world’s well-known beach towns, and major cities full of skyscrapers. Depending on itinerary, you’ll stop at several points in Indonesia, Malaysia, Thailand, Singapore, Vietnam, and Brunei. Looking to explore longer? Consider an overnight stay in a major city, or sign up for the Angkor Wat Program.

China Sea: Crystal travels through Southeast Asia’s major body of water, in going from Singapore to Hong Kong. In between are opportunities to sunbathe on the beaches, explore Southeast Asia’s distinct French influences, scuba dive, shop, and get to know the culture and character of the area’s major cities, including Ho Chi Minh and Singapore. New Year’s cruises feature a fireworks display from the ship.

Malaysia and Myanmar: Southeast and Southern Asian influences converge in these two countries. Cruises begin in the cultural melting pot of Singapore before going up the coast to Yangon. In between, see Southeast Asia’s beaches and major cities in a range of Malaysian and Thai ports, including Phuket, Langkawi, Penang, and Kuala Lumpur.

Explore China, Japan, and South Korea with the following itineraries:

Hong Kong to Beijing: After seeing the expansive, grandiose, and ever-growing urban center of Shanghai with a three-day stay, you’ll set sail to several Chinese ports: Xiamen, Dalian, and Yantai. In the process, get a detailed look at ancient Chinese history, see such important world history landmarks at the Forbidden City, Great Wall, and Tiananmen Square, and observe modern culture co-existing side-by-side with the past.

China to Korea and Japan: Start with China’s key cities and explore its history before crossing the waters to Pusan in South Korea and then to Osaka, Kochi, and Tokyo in Japan. Each depicts Asia’s accelerating modern culture, of technology, neon-lit metropolises, and urban landscapes expanding upward, alongside Buddhist and Shinto religions and ancient history.

There’s no one way to see Asia, so explore a pocket of it in depth through Crystal Cruises. Determine first where you want to explore before scheduling your exploratory vacation through Direct Line Cruises.