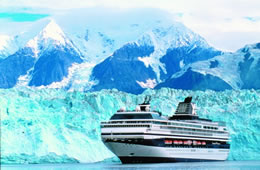 The rugged terrain, beautiful natural sights, and wildlife have turned Alaska into a major cruise draw. In the present, all contemporary cruise brands, as well as many luxury liners, start trips in Seattle or Vancouver, B.C. and travel one way or round trip through the great northern points of the United States.

Alaska cruise trips, based on itinerary, travel through the Inside Passage, making additional stops if the trip is longer, and Celebrity Cruises, with its Solstice, and Millennium ships, is no different. Cruises at least seven nights in length depart from Vancouver, Seattle, or Seward, and travel to the following destinations:

• Ketchikan: Known as the Salmon Capital of the World, Ketchikan is one of the many ports along the Alaskan coast for observing untouched natural wonders along with Native American culture. During a shore excursion, consider exploring the Misty Fjords National Monument or the world's largest collection of standing totem poles.

• Juneau: This city located on the Alaskan panhandle is visited by practically all cruise ships – from Celebrity and nearly all other liners. In fact, 1 million or more cruise passengers pass through this city situated at the base of Mount Juneau. If you don't plan to explore the city proper, consider taking a shore excursion out to Tongass National Forest, if one is available during your trip.

• Skagway: Another panhandle port, Skagway is a go-to stop for many summer cruise vacations. Unlike Juneau, however, Skagway is a perfect opportunity for exploring this northernmost state's history. As you plan and see which expeditions and tours are available, opt for an excursion to the Klondike Gold Rush National Historic Park or the White Pass and Yukon Route narrow gauge railroad.

• Icy Strait: One of the more recent cruise ports added to itineraries, Icy Strait is located within traveling distance of the Glacier Bay National Park. During your time in port, learn about the area's history of fishing and logging and Tlingit culture.

• Sitka: The city and borough on Baranof Island is perfect for the outdoorsman looking to explore. For cruisers, the port's area includes more than one trail for going on a backpacking excursion in the summer months: the Baranof Cross-Island Trail, the trail up to dormant volcano Mount Edgecumbe, or, for a challenge, Peak 5390.

• Victoria: Not far from Vancouver island, Victoria, B.C., if you don't know, is one of the oldest cities in the Pacific Northwest. While not all Celebrity Alaska cruises stop in this Canadian port, take time to see its many historic buildings and the second-oldest Chinatown in North America, if you do.

• Prince Rupert: The hub of Canada's northern coast, Prince Rupert is frequently visited during the route from Vancouver to Skagway. If your Celebrity cruise stops in this port city, make plans to watch for whales, eagles, and grizzly bears.

• Hubbard Glacier: While many cruise ships pass by the Hubbard Glacier, Celebrity offers more than a glimpse. In this stop during your Alaskan cruise, observe, if not explore, this glacier stretching from Alaska to part of Canada. Before it reaches the sea, it merges with the Valerie Glacier and, in the past, was the location of the second-largest glacial lake outburst flood.