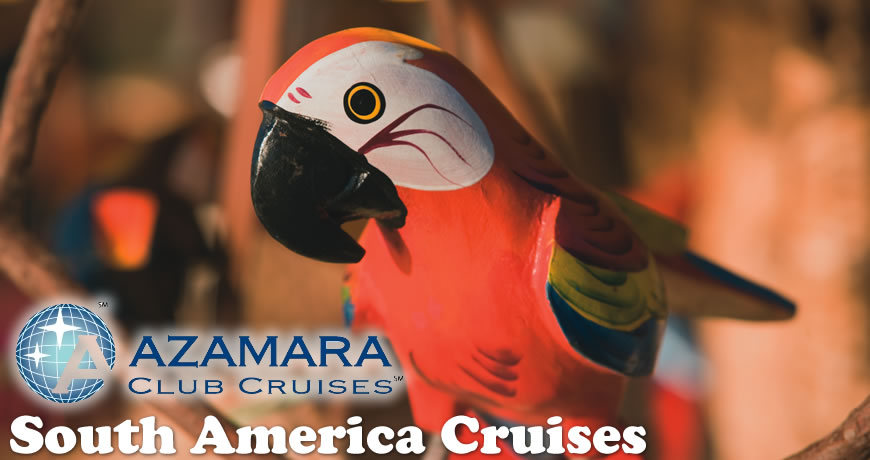 There’s no single way to experience South America, a continent with some of the world’s most beautiful beaches along its shores, a heart of dense rainforest, mountains channeling up the western portion, and a melting pot of cultures. Extremes characterize its design, from bordering the Caribbean and going through the equator to getting extremely close to Antarctica at Cape Horn to the high peaks of the Andes Mountains and falls nearly the size of Niagara.

Azamara Club Cruises introduces travelers to each of these facets through detailed, concentrated itineraries and exclusive Land Discoveries excursions. Experience the Amazon and spend time during the Carnival in Rio de Janeiro, or sail around Cape Horn to get extremely close to Antarctica and then marvel at the gorgeous landscape of fjords as you travel up Chile’s coast.

The Azamara Journey, a midsized ship that docks in smaller ports, takes the following routes around South America.

Brazil to Uruguay and Argentina: Start off with the coastal towns featuring some of the world’s best-known beaches, from Rio De Janeiro to Buzios, Paraty, Ilhabela, and Punta Del Este. From here, you’ll see Buenos Aires, known as the Paris of South America for its distinctive European influence, and Montevideo, the Uruguayan capital that’s one of the continent’s major ports.

Antarctica and the Falklands: Take a dip down south to the continent’s coldest points – the cities and islands surrounding Cape Horn. See the world’s southernmost city, Ushuaia, and then spend some time taking in the sights of Elephant Island, Puerto Madryn, and Buenos Aires.

Brazil to the Caribbean: Begin in one sun-drenched location and finish your trip in another. These one-way itineraries start in Rio De Janeiro and then proceed up the eastern coast. See more facets of Brazilian culture, including getting close to the rainforest, through Salvador De Bahia, Recife, and Belem, before sailing north to French Guiana. After, relax while exploring the Caribbean in Barbados and the British Virgin Islands. All trips finish in Miami.

Azamara highlights its stops in Buenos Aires as a must-see Land Discovery – an excursion that goes far more into depth than the standard sightseeing options.

In this cosmopolitan city, you’ll find out why guidebooks call it the “Paris of South America,” while you travel down boulevards and visit several well-known buildings: Plaza de Mayo, the Metropolitan Cathedral, and Colonial Town Hall. Then, see where Argentina’s Italian immigrant population settled in La Boca, before going off to see Eva Peron’s tomb at Recoleta Cemetery.

Get to know each side of South America through an in-depth cruise through Azamara. Smaller ports and more detailed itineraries let you into the history and culture making up each country. To start, schedule your trip and find discounts today through Direct Line Cruises.