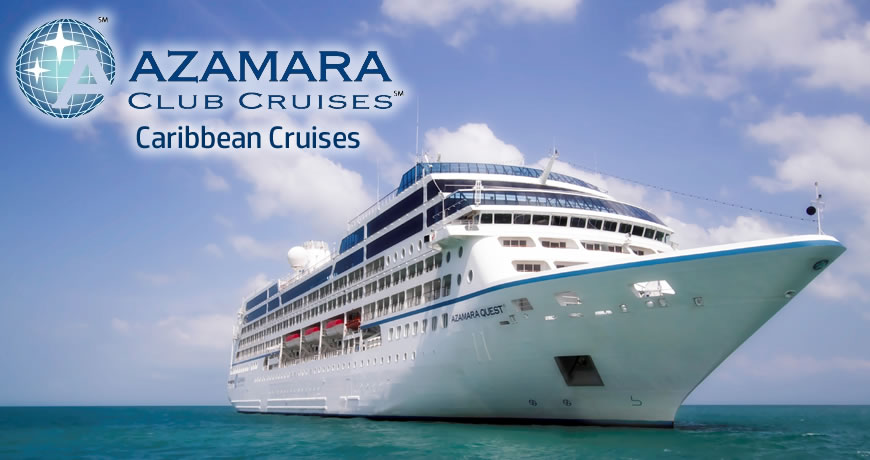 Azamara Club Cruises to the Caribbean

Get close to the Caribbean’s sun and sands on board an Azamara Club cruise. Such trips aren’t just excursions for relaxing on the soft white beach flanked by blue waters – they’re an opportunity to explore the cultural melting pot each island has to offer.

Over multiple centuries, native cultures, exploration, colonization, and modern developments created the unique characters of each Caribbean island. As such, Victorian or older Dutch or Spanish architecture can be spotted throughout the streets, with rainforests, volcanoes, and beautiful beaches nearby. Cuisines suggest a merging of native Carib flavors with European and African influences.

Azamara’s excursions further highlight this cultural confluence. Once you stop in port, take a traditional route of exploring the city – or venture off on a hike into the forest, mountains, or an old sugarcane plantation.

The Azamara Journey makes multiple trips to the Caribbean throughout the year, including the following two itineraries:

From Miami: Depart from this Floridian port to take a tour of the Caribbean, Central, and South America. You’ll have the opportunity to explore Curacao, Aruba, Colombia, Panama City, the Panama Canal, and Costa Rica.

Hideaway: Spend more time in the islands with this itinerary. Going through the Lesser Antilles, this cruise stops in St. John, Guadalupe, Dominica, Nevis, St. Barts, St. Maarten, and the British Virgin Islands.

As much as the Caribbean appears to have a uniform visual character, a closer look – one acquired with Azamara’s smaller ships and detailed Land Discoveries excursions – reveals this.

Willemstand, Curacao: This city has been one of the Caribbean’s busiest ports since the 1600s. Although modernized, its historic center with Dutch architecture hints at its colonial past.

Oranjestad, Aruba: The island’s capital and largest city is named after Willem van Oranje-Nassam. While taking in the sunny weather, shop at its many jewelry stores or schedule an excursion to an ostrich farm.

St. John: The smallest U.S. Virgin Island features multiple sugarcane plantations – with many explored through a hiking excursion. Or, stay close to the beach to see undersea coral gardens with a snorkeling tour.

Roseau, Dominica: One of the last colonized islands now boasts the largest pre-Columbian populations in the eastern Caribbean, with 3,000 native Caribs.

Charlestown, Nevis: With a volcano at the center, Nevis and the port of Charlestown offer opportunities for golfing at the Four Seasons, seeing beaches by horseback, and exploring old sugar plantations.

Philipsburg, St. Maarten: One of the easiest Caribbean locations to explore has a strong Creole influence and sunken shipwrecks ripe for exploration by scuba diving or snuba.

Virgin Gorda, BVI: This unusually-shaped island can be explored by jeep or by hiking the trails. If you want to stay by the beach, you might see the sight of dolphins or notice The Baths, a series of giant granite boulders on the shore and water.

Discover all aspects of the Caribbean with an Azamara cruise. To start exploring, begin by scheduling your trip with Direct Line Cruises.