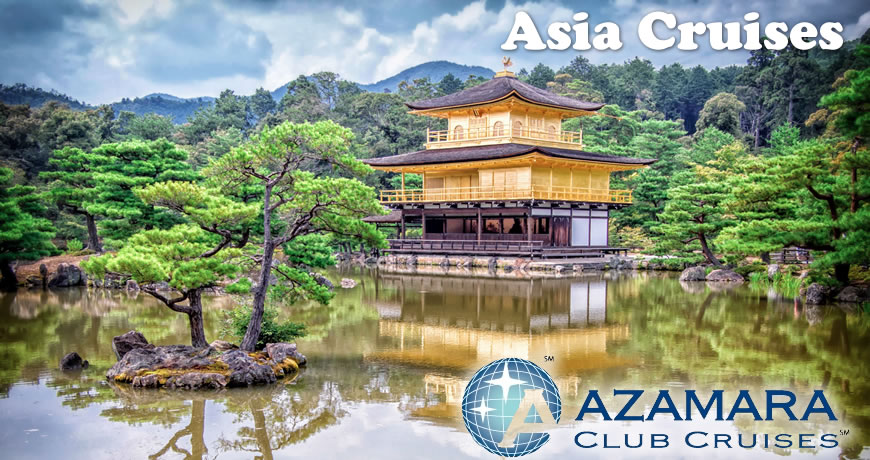 Asia’s the world’s largest continent, with a range of cultures between the thriving cities of Dubai and Shanghai. In recent years, cruises to this region started increasing, with growth expected through 2017.

Trips essentially touch on all major aspects of Asia: the modern culture that brings upon technological innovations, the ancient history now represented in ruins, various religions from Buddhism through Shintoism, cuisine, and the beautiful beaches around its perimeter.

While Azamara Club cruises encompass these points with its trips to Asia, the luxury line known for more intimate, detailed itineraries takes it a step further. Cruises cover practically the entire perimeter, from Japan through the Middle East, and offer a range of perspectives.

The Azamara Quest travels along the following itineraries:

The Spice Route: This Southern Asian cruise stays along the countries of Asia bordering the Indian Ocean. Explore Indian culture in Mumbai, Goa, and Madras before your ship sets out to the many island nations: Sri Lanka, the Maldives, and the Andaman Islands. Longer trips taking this route then venture into Southeast Asia, where you’ll stop in Myanmar, Phuket, Langkawi, Penang, Kuala Lumpur, and Singapore.

Singapore to Hong Kong: From one major Asian metropolis to another, this itinerary remains a popular route for visiting Southeast Asia. With Azamara, you’ll start in the cultural melting pot between Malaysia and Indonesia and then proceed to travel through the island of Borneo, see Brunei, visit the Philippines, and then finish in Xiamen, China.

Thailand and Vietnam: This itinerary stays around the perimeter of mainland Southeast Asia. Bring a camera for the stunning landscape of Halong Bay, known for thousands of limestone islands, and then explore the cultures and sights of Da Nang, Ho Chi Minh, Ko Samui, and Singapore.

Thailand and Malaysia: You’ll visit multiple ports in Thailand, Myanmar, and Malaysia with this Southeast Asian itinerary, including the beach destination of Phuket, Langkawi, Penang, Sumatra, Kuala Lumpur, and Singapore.

Thailand to Indonesia: Start on the mainland to explore Southeast Asia’s many islands. After stops in Singapore, Ko Samui, and Bangkok, you’ll have the chance to see Semarang, Celukan Bawang, Lombok, and Bali.

Indonesia to Japan: Begin in one island nation and end in another. Trips start with Bali and Komodo and then proceed through Malaysia, the Philippines, and Taiwan, before visiting the sights of Okinawa and Osaka.

Middle East: Azamara takes you to the peninsula’s prime destinations, including Dubai and Oman, before traveling through the Suez Canal to Israel, Cyprus, and Turkey.

With so many nations and cultures, each Azamara cruise represents a unique facet and corner of the world’s largest continent. Start off on an adventure of a lifetime by scheduling your trip with Direct Line Cruises.