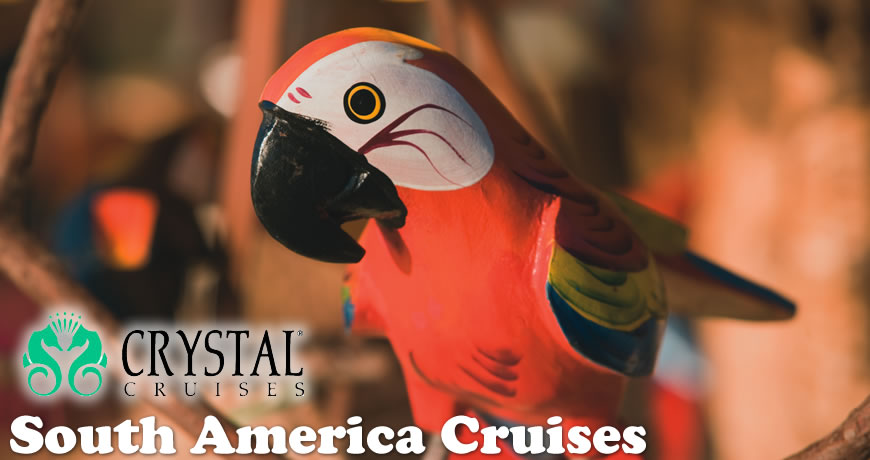 From the Paris of the Southern Hemisphere to Patagonia, get to know the most intimate, detailed aspects of South America on board a Crystal cruise.

Itineraries visit all major regions of the continent: Brazil’s coastline with some of the world’s best-known beaches and passageways into the Amazon, through the cold tip of Cape Horn to Antarctica, and into some of its most key historical points in Peru, Ecuador, and the nearby Pacific Islands.

The cruise line schedules all trips on board the Crystal Serenity, a vessel that set sail in 2003. The ship offers sufficient space and personalized accommodations for just over 1,070 passengers. Enrichment opportunities during your voyage extend from a range of guest speakers, celebrities, and writers to exercise and computer classes.

Miami to Lima or Valparaiso: For travelers looking to start close to home, Crystal departs from Miami to cruise through the Caribbean and go through the Panama Canal. From here, cruisers get a perspective on modern civilization juxtaposed with ancient cultures, as well as cities and villages near the towering Andes Mountains.

Trips that go down to Valparaiso explore the western coast further, through Patagonia and a stop in the Galapagos Islands.

Lima to the South Pacific: Pacific Islanders are said to have migrated through the Southern portion of the ocean toward South America, and Crystal takes a reverse look at this route. From South America’s western culture capital, the ship departs to Easter Island, the Pitcairn Islands, and then several points in French Polynesia. Trips finish in Auckland, New Zealand.

Miami to Rio De Janeiro: From one warm, balmy city by the beach to another in the southern hemisphere. Crystal makes its way through the Caribbean’s major islands before giving a tour of the continent’s eastern coast. Certain itineraries venture down the stunning yet mysterious Amazon River, through the jungle and to various small villages lining its shores. Or, other trips strike a path down the Atlantic, with stops in such beach towns at Recife, Fortaliza, Salvador de Bahia, and Buzios, before finishing in Rio De Janeiro.

Rio De Janeiro to Buenos Aires: Get to know Eastern South America’s cities in a single swoop. After departing Brazil’s sun and surf capital, the ship visits multiple smaller ports in the nation’s southern region, including Ilha Grande, Ilhabela, Itajai, Punta Del Este, and Sao Paulo – many of which are resort towns. From here, you’ll experience history and culture in Montevideo, Uruguay’s capital and one of the continent’s biggest ports. Cruises finish in Buenos Aires, Argentina’s capital known for a cosmopolitan character, being the birthplace of the tango, and the surrounding Argentinean cowboy culture.

Buenos Aires to Antarctica: Head down to South America’s most southern tip, with glimpses into the culture in Montevideo, Puerto Madryn, and Ushuaia, the world’s southernmost city. Then, Crystal leaves the mainland to explore the rocky, cold landscapes of the Falkland Islands, Tierra Del Fuego, and Antarctica. After, the cruise returns to South America, where it travels up the western coast, through Chile’s stunning landscape of fjords and mountains. Cruises end in Valparaiso.

It’s not just sun and samba. Get the full look at South America’s landscape and culture on board a Crystal cruise. Choose where you want to go, and then find deals for your trip through Direct Line Cruises.